POSTED ON September 13, 2020 In Member Spotlight 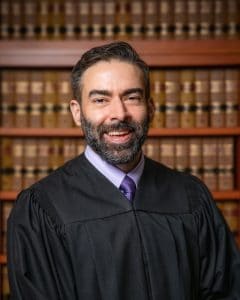 September is Bi Visibility Month and September 23 is Bi Visibility Day.  My name is Mike Jacobs.  I’m a trial judge on the State Court of DeKalb County, Georgia.  I’m bisexual and came out publicly in April 2018.  It’s been almost two and a half years since that time.  I appreciate my colleagues in the International Association of LGBTQ+ Judges giving me this opportunity to prepare a member spotlight article to reflect on what bi visibility means to me.

According to demographic data gathered by the LGBTQ Victory Institute, there are only three bi men who hold state-level elected office in the United States.  That small list includes one judge (me) and two state legislators.  There are no bi men in any federal office.  In contrast, there are 19 bi women in federal and state elected office, including Senator Kyrsten Sinema of Arizona and Governor Kate Brown of Oregon.  The difference in the number and status of bi men serving in public office is a symptom of the stigma we face in society, even as other groups within the LGBTQ community are making strides in terms of public visibility and acceptance.

I am married to an awesome woman, my beautiful wife Evan.  She is the love of my life.  Our marriage is rock solid, in part because of how authentic we are as people and how real we are with one another.  Upon coming out, Evan and I encountered a lot of the stigma that too often restrains bi men from being our authentic selves.  The question Evan and I received most frequently in response to my coming out was, “What’s wrong?”  Some people asked questions that were much worse.  For example, one question I remember quite vividly suggested that I was being blackmailed.  These questions and insinuations tended to be negative, and sometimes they were shockingly harsh.

What actually happened was that I had seen a couple of therapists in 2017 and early 2018 who helped me navigate a difficult period of my early 40s.  I was no longer able to bear the dissonance between the way I felt inside and the way my life blended into the heteronormative world.  Almost two and a half years after coming out, I’m the happiest I’ve ever been.  The many questions Evan and I were asked after my coming out all suggested that something was wrong.  In reality, everything was finally right.

At the beginning of court sessions, which are virtual right now due to COVID, I’ve started extending an invitation for lawyers, litigants, and witnesses to inform me how to properly address them.  When we start conducting jury trials again, I’ll do the same for jurors.  The proper way to address a person is not always reflected on the docket, court calendar, or jury list.  This simple gesture is an idea I received from my friend Lisa Burke, the Minority Program Concerns Coordinator for the New Jersey Administrative Office of the Courts, in a judicial education program that she helped produce for our Association.  It is a way of ensuring everyone is treated in a manner that respects who they are, whether that relates to gender identity, cultural background, the correct pronunciation of a name, or any other aspect of a person’s identity.

Visibility is about being seen as who we are.  For me, it required vulnerability and courage, but I can make it easier for others.  In my professional life, that takes the form of the announcement I make at the start of court, inviting people to tell me how I should refer to them.  In a more general sense, it involves telling my story so that future instances of bi men articulating their truth are not greeted with stigma, but rather with acceptance, dignity, and respect.