POSTED ON December 27, 2020 In Member Spotlight 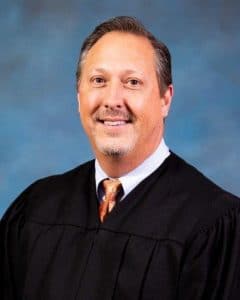 This month we feature Judge Mark Scurti. Judge Scurti serves on the District Court of Maryland for Baltimore City. He is the current president of the Maryland State Bar Association.

Q.  When did you become a judge and what was that process like?

A.  I was appointed by Governor Martin O’Malley in September 2013. In Maryland, all judicial applicants must submit an application to the Administrative Office of the Courts then undergo a series of interviews by various local and specialty bar associations and they make recommendations to the Judicial Nominating Commission.  The Commission then makes its recommendations of qualified candidates to the Governor for final selection.  Once appointed, the term is 10 years and can be renewed.  Unlike the Circuit Court, no election is required for District Court appointments.

Q.  When and why did you join the LGBTQ+ Judges Association?

A.  I was involved with the LGBTQ National Bar Association (formerly known as NLGLA) in its early years. My first conference at Lavender Law was in 1989 in Atlanta, Georgia.  As a law student I was amazed at the number of students, lawyers and judges that were in attendance all willing to share their stories, struggles, and successes.   I knew then that I had made the right decision to be a lawyer and wanted to be on the path to be an openly gay judge.   As soon as I was appointed to the bench, I immediately joined the International Association of LGBTQ+ Judges because it was an organization that I felt I could contribute to and learn from other judges from around the world.

Q.  What is the importance having openly LGBTQ judges serving on the bench?

A.  I watched when the first openly lesbian judge was appointed in Maryland to the District Court. She paved the way for others to consider the judiciary as a career move.  Having the visibility of an openly LGBTQ judge on the bench sends a strong message of inclusion and equality.  It also is a constant reminder to other judges to self-check their own implicit bias towards the LGBTQ community.  I have found that being an openly gay judge, LGBTQ lawyers and law students see that they too can be appointed without fear of discrimination and it sends a strong message to the community that we are part of the community and the diverse bench is reflective of that community.

Q.  How have you been involved in the LGBTQ community before and after joining the bench?

A.  During law school I volunteered to work with a grassroots organization, Free State Justice, that focused on changing the laws in Baltimore City to provide for a non-discrimination policy in housing, employment and public accommodations. Shortly afterwards I was appointed to a special commission by Governor Glendening to conduct hearings around the state and make recommendations to the Maryland legislature to pass the Non-Discrimination Act of 2000 for statewide non-discrimination laws in housing, employment and public accommodations.  Coming out of the 1980’s, in private practice I dedicated much of my practice to pro bono representation of individuals infected by HIV.  Later, I focused on estate planning, bankruptcy and family law matters, taking cases that other firms shunned.  Through that work, I created the largest LGBT law firm in the MD/DC/VA area that operated for over 10 years.  In the firm we would regularly take on difficult and novel cases, partnering with NCLR, Lambda Legal and others.  Just before my appointment, we argued a case before Maryland’s highest court and won 7-0 for the right to have Maryland recognize an out-of-state same sex marriage that was legally performed elsewhere.

Q.  What type of law did you practice before you became a judge?

A.  Estate planning for LGBT couples and individuals, bankruptcy and family law.

Q.  What motivated you to become a judge?

A.  Throughout my education I saw how judges could make a difference and touch many lives and that motivated me to want to become a judge. I had great mentors who were judges and many encouraged me to apply.

Q.  What was your biggest challenge in becoming a judge?

A.  I had primarily handled only civil cases, and had little to no criminal law experience, so I had to quickly learn and get up to speed with the criminal dockets. Coming from private practice into a government setting, there was a learning curve experiencing how government operates which was very different than private practice.  I also have to admit another challenge was the loss of income, as there were no more equity share distributions, expense accounts and bonuses.

Q.  What has been the most unexpected or exciting experience you have had as a judge?

A.  The most exciting experience I have had is when I see my probationers who are doing well and drug or alcohol free. We have a program in our court that helps defendants get jobs and earn a paycheck.  This program has been very rewarding as we hear from their families and employers who relate how these opportunities have changed their loved ones’ lives and given them self-respect and independence.  One of my probationers in the program came to our graduation and was excited to show me his first ever paycheck that he framed.  His eyes were tearful as he hugged and thanked me for believing in him and giving him an opportunity.  He was 65 years old.

Q.  What has been the biggest challenge in serving as a judge?

A.  One of the biggest challenges has been knowing that my decision can be appealed. Another challenge has been something I wasn’t expecting, that being my whole social circle of friends changed.  There were many events I could not attend and gatherings that would compromise any appearance of impropriety.

Q.  If you could go back in time to offer advice to your younger-self about your career and your development as a judge, what would that advice be?

A.  Start earlier. Have more confidence in yourself and know that you can make it happen.

Q.  What advice or wisdom can you offer newer judges?

A.  Be patient and learn how to listen. You are no longer an advocate and need to learn that saying less is the rule as your words carry weight and meaning.  Don’t be afraid to believe in someone and give them opportunities to work, recover, and reform.  Some will fail, but others will prevail and that will give you great joy.   You are not alone.  Phone a judge friend and bounce an issue off of them for guidance and information so you can make the best decision.  But, make a decision!

Q.  What would you like people to know about you personally (hobbies, accomplishments, personal background)?

A.  I am bi-coastal, as my husband of 20 + years resides in San Francisco, CA. I am a bar association junkie which has led me to my current role as President of the Maryland State Bar Association.  I am an avid foodie and wine aficionado. Let’s cook together sometime!

Q.  How are you handling court during the COVID-19 pandemic?

A.  Ugh, will it ever be over? Modifying and adapting the lyrics from Hamilton (and borrowing them from some judges in Texas), “You say, COVID-19 is all but driving your court time away, We’ll be back, soon you’ll see, you’ll be glad when you appear before me.”  Clearly it has taken its toll.  COVID has given me a new perspective on assisting our courts in developing more remote protocols for conducting routine matters such as red light/speed camera/parking citations.  It has allowed the court to provide greater access to justice and a higher rate of participation by litigants than ever before.   We have to be creative without jeopardizing individual rights.  It also has opened our eyes to the tremendous inequalities that exist for people and how many were living paycheck to paycheck and without access to adequate bandwidth and technology.   The challenge going forward is to be able to address the need for pro bono representation for those at risk of losing their housing and basic benefits.  We as judges need to be part of the solution and not sit idly on the sidelines.