POSTED ON November 30, 2020 In Member Spotlight 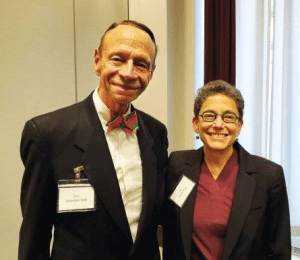 As our November 2020 member spotlight, we are republishing this delightful interview with Judge Sebastian Patti, an LGBTQ trailblazer in the Illinois judiciary who now serves as an immigration judge in Los Angeles. This interview was published in the Windy City Times on August 7, 2019.

To say Sebastian Patti has achieved milestones—for himself and the LGBTQ community—might be giving him short shrift.

More than two decades ago, Patti, 66, became the first openly gay appointed judge and, in 2009, he took his seat as the first openly gay appellate court justice. He retired from being a Cook County Circuit Court judge last year, and is now in Los Angeles, hearing asylum cases for the U.S. Department of Justice. Recently, he received an award from the Alliance of Illinois Judges—a group of lesbian and gay judges in Cook County.

Windy City Times: Looking into your background, I noticed that you were a history/science major [at Duke University]. What propelled you to go into law?

Sebastian Patti: Zoology is a real passion of mine—birds, and so forth. However, the reason I went into law is [really] simple: My father believed that a legal education was extraordinarily important. He admired lawyers a lot, and he thought the world of his personal lawyer. He thought practicing law would be hugely beneficial for me.
And—I hope you’re sitting down for this—when I went to law school in Kansas ( so it was an in-state school ), tuition was $750 a semester! We certainly don’t do that any more.
I was interested in environmental law. I teamed up with a professor to write a couple law-review articles on wildlife law.

WCT: And on a more personal level, when did you come out?

WCT: And the political climate for the [LGBTQ] community has changed since then.

SP: I’ll say! If someone had put a gun to my head in 1995, when I was appointed judge, and said that same-sex marriage would be a constitutionally protected right, I would’ve said, “Absolutely no way.”

WCT: You’ve established some firsts in your legal career. Do you see yourself as a role model?

SP: I actually don’t. My position is that I have been so lucky in life, and life has presented me with so many options that I feel an obligation to give back—no matter how that manifests itself. I try to capitalize on it, so if I have a way, an approach or a manner at looking at an issue, I do it. If that ends up the sum and substance of being a role model, I plead guilty.
When I got that award on June 26 [from the Alliance of Illinois Judges]. … I [mean], I received an award that was named after me! What an honor—but, with my self-deprecating humor, I said, “I’m still alive, and I’m getting this award!” I raised my right hand and swore I’d never jaywalk again. [Laughs] It really was a wonderful event.

WCT: You’ve moved to L.A. There are some who thought you’d be in Chicago forever.

SP: I had some health issues. I was diagnosed with throat cancer in early 2016. Of course, it was life-altering; the treatments were brutal, and my stamina is not what it used to be. So a warmer climate is easier on me. I’m looking out right now—there isn’t a cloud in the sky, and the temperature is probably 82, 83.

WCT: Being an immigration judge for the DoJ in the age of Trump… What can you say about it?

SP: Never a dull moment! I actually have nothing but very positive things to say. [Note: Patti requested that this be the extent of questioning regarding his current job or thoughts regarding immigration.]

WCT: When I last interviewed you in 2008, I asked if you had any LGBT icons. You listed Ron Sable, Tom Chiola, Nancy Katz and Jon-Henri Damski. Just curious: Should that list remain intact?

WCT: And what do you consider to be the most groundbreaking cases for the LGBT community?

SP: There are several. I’d definitely say United States v. Windsor [which struck down the Defense of Marriage Act] and Obergefell v. Hodges [which established same-sex marriage as a constitutional right], but there are also Bowers v. Hardwick [a controversial case that upheld the constitutionality of a Georgia sodomy law] and Lawrence v. Texas [which held that laws prohibiting private same-sex relations between consenting adults are unconstitutional].

WCT: Looking back over your career, what would you say is your biggest regret—and what are you proudest of?

SP: Well, that’s one I didn’t see coming! [Pauses] I think my greatest satisfaction is being able to look back and say that I was ( and am ) regarded as an excellent judge and—because of that—in some way, I have been able to contribute to people saying, “If that old Patti can do it, then maybe I can do it!” And maybe this is the functional equivalent of being a role model, I love that I’ve encouraged people to not be afraid and take the leap. We now have 16 or 17 openly gay judges in Chicago. That’s amazing!

As for my biggest regret, I can’t say that I have a significant professional one. I once told a therapist, “You know what? If I go to the pearly gates tomorrow, I’d be happy to present myself because I’d have no explaining to do.” It’s that satisfaction that, in large measure, helped me get through the cancer treatment. I’m a pretty positive person— even with developments like not having salivary glands now, so I have to keep water with me all the time. I told my oncologist, “You fried my salivary glands, but you know what? You cured me of cancer, and I can do that math.” He smiled.