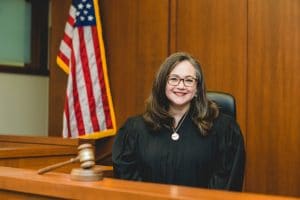 Our October 2020 member spotlight features Judge Tiffany Palmer of the Court of Common Pleas of Philadelphia, Family Court Division.  Judge Palmer is the newest member of our Association’s board of directors.

Q. When did you become a judge and what was that process like?

I am a state trial court judge assigned to the Family Court Division as of January 2020, having been elected to a 10-year term in the November 2019 General Election. In May 2019, I won the Democratic Party Primary Election for one of six seats among 28 candidates. I ran a competitive grassroots campaign.

Q.  When and why did you join the IALGBTQ+J?

I joined as soon as I became a judge. I have been a member of the affiliated National LGBT Bar Association since the beginning of my legal career and a regular presenter at the Lavender Law Conference of the National LGBT Bar Association. I am also the former Director of the Association’s Family Law Institute. In 2002, I co-founded the Association’s annual Lavender Law Career Fair, now the largest annual minority group career fair in the country. I am excited to now join the Board of the IALGBTQ+J.

Q. What is the importance having openly LGBTQ judges serving on the bench?

I am one of two openly LGBTQ+ judges assigned to Philadelphia’s Family Court, and one of six in the First Judicial District. I feel it is critically important that the judiciary reflect the demographics of the populations that come before the courts and openly LGBTQ judges are part of reflecting that diversity.

Q.  What type of law did you practice before you became a judge?

I practiced family formation and dissolution law for 20 years before becoming a judge.

Q.  What motivated you to become a judge?

For me, the motivation came from practicing family law for 20 years as an openly LGBTQ person. I felt it was the right time for me to step up for public service. I started my career as a public interest attorney through an Equal Justice Works fellowship where I represented low-income LGBTQ people in family court cases long before marriage equality.

I started my own firm in 2003 and continued my work on groundbreaking cases in the area of expanding the definition of family to include the many diverse family forms that come before the courts. This included cases involving LGBTQ+ people, those who formed families through assisted reproduction, grandparents and other extended family acting as parents, and people raising children as their own without an adoptive or biological connection.

The 20-year point in one’s career is a time for reflection, and I wanted my next 20 years in the law to be in public service where I could bring my experience and values to help improve our court system, especially for unrepresented parties. About 90% of cases that come into our Family Court system involve people who do not have an attorney, so the judge has a unique role to play in ensuring parties understand the proceedings and have a fair opportunity to present their case.

Q. What was your biggest challenge in becoming a judge?

My biggest challenge to becoming a judge was winning a highly competitive City-wide election. Running for office was a full-time job in addition to my full-time job as a partner in a law firm, on top of having a family and being a parent. It was an incredibly difficult and challenging experience and I am so grateful to have been elected and to have the honor of serving as a judge.

Q. What has been the biggest challenge in serving as a judge?

I was only a sitting judge for six weeks before the Covid-19 Pandemic hit. I now conduct all trials and hearings through telephone and video. We hear about 15 cases each day. Since most of the litigants are self-represented, it is challenging to try to ensure the parties understand the proceeding and have the technology necessary to participate. I have managed this challenge with an amazing team of committed staff who help run my “virtual” courtroom.

Q.  What would you like people to know about you personally?

I met my wife 22 years ago when we worked together in an LGBTQ civil rights organization. We married in Vermont in because we could not marry in our home state of Pennsylvania at that time. Having been a legal outsider as a member of an LGBTQ family gives me an important perspective on the role the law plays in the recognition of families. We have a wonderful teenage daughter and we love spending time together outdoors – hiking, skiing, kayaking and camping.