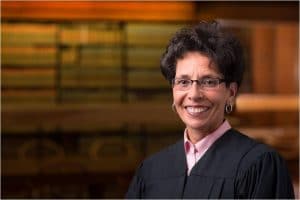 “Judge Pierson has been a committed and exceptional leader of the Circuit Court for Baltimore City. He has provided exemplary service to the Judiciary, the residents of Baltimore, and the people of Maryland,” Chief Judge Barbera said. “Judge Carrión is eminently qualified to lead the court to meet the mandate of equal justice under law. She brings a wealth of experience as a jurist and a capable, dynamic manager. I look forward to working with her to meet the challenges the future will bring.”

The Circuit Court for Baltimore City is the only circuit court in the Eighth Judicial Circuit. As a result, the circuit administrative judge of the Eighth Judicial Circuit is responsible, in the Circuit Court for Baltimore City, for the administration of the court, budget, and procurement functions, as well as management of trial calendars to ensure the expeditious resolution of cases.

“I am honored to have Chief Judge Barbera’s trust and support in this new chapter of service,”
Judge Carrión said. “It has been a privilege to work with Judge Pierson, and I intend to build upon his wonderful example of thoughtful leadership. I look forward to this opportunity to serve my community and the courts in a new role.”

Judge Carrión was appointed to the District Court in Baltimore City in December 1995 and
served there until November 1999, when she was elevated to the Circuit Court for Baltimore
City. Judge Carrión was judge-in-charge of the court’s family division from November 2003 to
December 2009. Since 2013, she has represented the Eighth Judicial Circuit on the Judiciary’s
Conference of Circuit Judges. She has been actively involved in several Judiciary committees
and most recently, from 2015 to 2016, was a member of the Judicial Council’s Court Access and
Community Relations Committee, chair of its language access subcommittee, and a member of
the Judicial Council’s Specialty Courts and Dockets Committee.

After attending Colegio Espiritu Santo in Puerto Rico, Judge Carrión graduated from the College
of Notre Dame of Maryland in 1981 and earned her Juris Doctor from the University of
Baltimore School of Law in 1984. She was admitted to the Maryland Bar in 1985. Before joining
the bench, Judge Carrión was in practice with Russell and Thompson, P.A., from June 1985 to
October 1986, and Piper & Marbury from October 1986 to March 1990. She served in the Office
of the Maryland Attorney General, Correctional Litigation Unit, from March 1990 to December
1995.

Judge Carrión has received numerous awards and was twice named by The Daily Record as one
of “Maryland’s Top 100 Women.” In 2011, she received The Daily Record’s Maryland Leadership
in Law Award and earned an Outstanding Achievement Award from the Maryland Hispanic Bar
Association. Judge Carrión is a fellow of the Maryland Bar Foundation and the Baltimore City
Bar Foundation. She has been a member of the Maryland Hispanic Bar Association since 1993
and was a member at large from 1994 to 1999.

“I have had the honor of working with Judge Carrión since I came to the bench and know her as
an astute judge and dynamic leader,” Judge Pierson said. “I am grateful to have been of service
to Baltimore and the people of Maryland as a judge and leader of the Eighth Judicial Circuit. It is reassuring to leave the management of the court in such capable hands.”