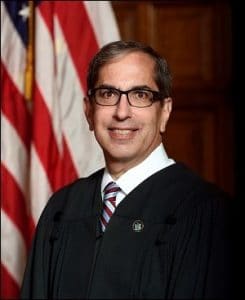 The first openly LGBTQ person to sit on New York’s highest court, Judge Paul Feinman was sworn in on June 21, 2017, during Pride Month. After working with the Legal Aid Society and serving as a Law Clerk to a highly respected judge, Judge Feinman began his own judicial career with his election in 1996 to serve on the New York City Civil Court. In 2007, he was elected as a Justice of the New York Supreme Court (the trial court of general jurisdiction), and then appointed by the Governor in 2012 to the New York Supreme Court, Appellate Division, First Department (intermediate appellate court).

Judge Feinman’s commitment to the advancement of LGBTQ rights and justice marked his entire career. While attending law school at the University of Minnesota in the 1980s, he founded an association of gay students. He was a proud leader and representative of the LGBTQ community at every step, including serving as a President of the International Association of LGBTQ+ Judges from 2008 to 2011 and on our Board of Directors for many years.

Judge Feinman exemplified what is best about our nation’s legal community and judiciary. He will be remembered for his kindness, his humility, his brilliant legal mind, and being a sometimes beleaguered NY Mets fan.

We want to carry on his legacy, by helping you to carry it forward. The International Association of LGBTQ+ Judges has created this scholarship to assist you as you create your own path of passion and commitment to justice, as our friend Judge Feinman always did.

The Judge Paul G. Feinman Scholarship will be awarded annually to a law student who has demonstrated a commitment to the LGBTQ+ community and will be working with (as an intern, extern, clerk, etc.) a judge some time prior to the student’s final year of law school. Special consideration will be given to students who will be working with a member of the International Association of LGBTQ+ Judges.

The scholarship is in the amount of $2,500. The scholarship funds are unrestricted and may be used for tuition, housing, books, transportation, living expenses, bar application/study expenses, or any other law school-related expense.

HOW TO APPLY FOR THE JUDGE PAUL G. FEINMAN SCHOLARSHIP

To apply for the Judge Paul G. Feinman Scholarship for the 2022/2023 cycle, please send an email to lgbtqjudges@gmail.com no later than April 1, 2022. The email should contain a statement of interest that reflects the criteria stated above. The Scholarship Committee will evaluate all of the applicants and announce the scholarship recipient by June 1, 2022.