July 22, 2019 (WBZ CBS Boston) – Is the Massachusetts criminal justice system failing communities of color? WBZ-TV is looking at the state’s courts, prosecutors and prisons in a series of special reports this week. 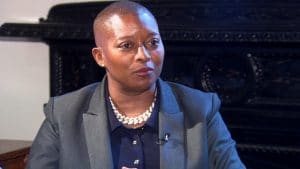 Out of 82 seats in the Commonwealth’s Superior Court, Justice Shannon Frison is one of two African-American justices.

“I’m a poor, black woman, from Chicago, who’s also gay and a Marine. You can’t replicate that experience,” said Frison.

“No matter where you are and what you’ve done. How serious your matter is, what your ethnicity or race is, you’re almost guaranteed to be in front of a white judge in Massachusetts, on your criminal matter,” Frison said.

The 49-year-old Marine is a Harvard and Georgetown graduate.

She was first appointed to Boston’s Municipal Court in 2009 by Governor Deval Patrick and confirmed to the Superior Court in 2013. No black judge has been appointed to the high court since.

State data shows of the 374 trial court justices in the system, 39 are people of color.
Yet, Census figures project that by 2020, minorities will make up more than a quarter of the state’s population.

“It’s too few for the people we serve,” said Frison.

“Here in Massachusetts, not in all these other places we think are so different from us, but here in Massachusetts, we are still imposing higher bail on black and brown people and we are still imposing longer sentences on black and brown people,” she told WBZ. “You always need people of color when you’re talking about the effects that racism has had and still has.”

In the 20th century, African-Americans slowly assumed positions of leadership in Massachusetts courts.

In 1978, the Boston Municipal Court saw its first African American Chief Justice. A black justice didn’t serve in the state’s highest court until 1997.

“When we’re vetting our lawyers to become judges, we’re not looking at what is society going to like in 10 years. Are they technologically competent? Are they innovative? Do they really think about social justice as a priority? That’s not on the application, and I’ve looked at it,” Perry said outside Suffolk Superior Court.

In a statement, the Baker-Polito Administration pointed to its appointment of African-American judges Kimberly Budd and Kenneth Desmond, both former Superior Court justices first nominated by Governor Patrick and confirmed to higher courts in 2016.

“We’re not paying enough attention to this issue beyond having committees that talk about bias and inclusion. There has to be a real effort into recruiting judges of color,” said Frison.

Of the 51 people who serve across three review boards, including the governor-appointed Judicial Nominating Commission (JNC), the Joint Bar Committee, and those elected into the Governor’s Council, only two are people are color.

“We have seasoned attorneys and judges that are willing to do mock interviews, to review applications, to answer questions, to literally do anything and everything to help our lawyers. But after all of that is said and done, we’re still not seeing them appointed,” Perry said.

Governor Baker’s office said of his administration’s 138 appointments, 24 have been people of color. Yet, the administration has not appointed a black judge to the Superior Court.