First Transgender Judge In Arizona Talks About Her Journey

Last month, Tracy Nadzieja stood in front of a courtroom, took an oath to become a commissioner of the Maricopa County Superior Court and became the first known transgender judge in the state. 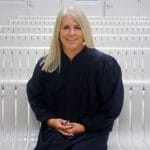 And, according to the Southern Arizona Gender Alliance, Nadzieja is just the third in the country.

Despite her historical position, she never wanted to be in the spotlight — especially for her gender identity.

But after she took that oath, she agreed to sit down with the Arizona Capitol Times to talk about being the first.

She also agreed to sit down with KJZZ’s The Show to talk about her journey and how she’s become the story despite her hesitations.

Listen to the podcast