website creator August 16, 2018 (G Plus, Guwahati)—Appointed the first transgender judge of Assam and northeast India, and the third in India, Swati Bidhan Baruah hails from the state’s strong LGBTQ+ community. 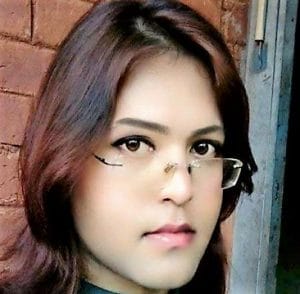 Born and brought up in Guwahati, Swati will work in a national Lok Adalat (civil court) in the city. Joining the brigade of 20 judges, she will mediate cases in Lok Adalat. She was appointed by Kamrup (Metro) district legal service authority.

Belonging to a community that is marginalized and discriminated against, Swati has never let anyone pull her down.

She has always dreamed of bigger things in life and has worked her way up to achieve them. Swati, who did her schooling and higher secondary education from Sri Satya Sai Vidyalaya Guwahati, went on to pursue B Com (Honours) with an economics major from West Guwahati Commerce College. She then completed a course in CS (Company Secretary) and Law from the Institute of Company Secretaries of India (ICSI) and Gauhati University Law College, respectively.

Ever since a very young age, Swati started to identify herself as transgender. “Every school has a protocol. Since I was born as a boy, I had to dress up in boy’s uniform—shirt and trousers. But I used to hate that uniform and getting out of it felt like getting out of prison,” Swati recalls, speaking to G Plus.

“As I hit puberty, the habits of dressing as a female and putting on makeup became more affirmative. So, I started to be discriminated by my schoolmates, family members and relatives. At home, I was shunned. I was never introduced to any guests or relatives; instead, I was locked in my room with two square meals and books,” she added.

Originally known as Bidhan Baruah, the 27 year old has been fighting for the rights of the transgender community for over seven years now.

In 2012, Swati approached the Bombay High Court seeking permission to undergo a sex reassignment surgery, which her family opposed. She won the case and underwent the procedure.

“When I was around 18 years old, I met my boyfriend—a flight lieutenant. It was a beautiful phase of my life. With him, I could just be myself, away from all the negativity and discrimination. We used to sneak out and go hang out at parks, indulge in long phone calls.

“During that time, I started taking classes to save some money. With the money saved and some help from my boyfriend, I decided to undergo the Sex Reassignment Surgery (SRS). I took my laptop bag, shoved some clothes in it and left home. When my mother asked where I was going, I told her I was going to repair the laptop. But instead I went to the airport and took a flight to Mumbai where I planned to undergo the surgery,” Swati told G Plus.

But things didn’t go as smoothly as planned. Her parents learned about her decision and through a family lawyer sent a legal notice to the doctor. The doctor kept the surgery on hold and asked Swati to get a court order. And so began the most difficult phase of Swati’s journey—in a new city, surrounded by new people, with barely any money to survive.

However, the Bombay High Court, passing a landmark judgement dated 7 May 2012, allowed her to undergo the surgery. The case was later referred as an example of SRS surgery by the expert committee on transgender under the Ministry of Social Justice & Empowerment.

Earlier this year, Swati had filed a PIL in the Gauhati High Court for non-implementation of a 2014 Supreme Court order (the NALSA judgement) on the welfare of transgender people. The Gauhati High Court, in May 2018, directed the state government to implement it within six months.

Recently, on July 14, Swati created history when she got appointed as a judge at the Lok Adalat.

Speaking to G Plus about her appointment as judge, Swati said, “I had plans of travelling to Delhi for a conference when I got a call asking me to reach court. I immediately cancelled my flight ticket and reached court fearing something negative had happened. To my surprise, when I reached there, I was informed that I had been appointed as a judge. The feeling is hard to describe in words.”

Swati now plans to work more aggressively towards empowering the transgender community. She believes that transgender people, especially the eunuch community, are more marginalized than the rest of the LGBTQ+ community and face much more struggles. “The problems are heightened in Assam compared to rest of the country. I feel that our state is full of educated illiterates with really shallow mentality,” Swati adds.

Swati has also been organizing workshops and awareness programs in the city for many years now. Apart from schools and colleges, workshops have been conducted at 14 police stations as well.

The appointment of Swati comes as a relief to over 5,000 transgender people living in Assam, who had to run from pillar to post with their legal and other social problems. They have a new hope in the form of Swati Bidhan Baruah.