December 11, 2019 (Advocate) — Gay conservative Patrick Bumatay was confirmed by the U.S. Senate as a federal appeals court judge Tuesday, making him the highest-ranking federal judge from the LGBTQ community and the highest-ranking one of Filipino descent. 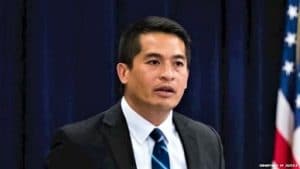 In a role reversal when it comes to LGBTQ matters, although not to Donald Trump’s judicial nominees, all 53 senators voting for Bumatay’s confirmation were Republicans, and of the 40 voting against it, 39 were Democrats and one, Angus King of Maine, an independent who caucuses with the Democrats. Seven Democratic senators were absent or otherwise not voting.

Bumatay will sit on the U.S. Court of Appeals for the Ninth Circuit, which covers nine western states and two territories. It has traditionally been one of the most liberal appellate courts in the nation, but with the confirmation of Bumatay and the likely confirmation of Lawrence VanDyke, it’s poised to become more conservative, in keeping with Trump’s efforts to swing the federal judiciary to the right.

Bumatay was the second out LGBTQ person nominated by Trump as a federal judge. The first, Mary Rowland, a lesbian, was confirmed by the Senate to the U.S. District Court for the Northern District of Illinois last summer with bipartisan support. Appellate courts are higher than district courts. The only other federal appeals court judge from the LGBTQ community is Todd Hughes, a gay man appointed by President Barack Obama, who serves on the U.S. Court of Appeals for the Federal Circuit. That circuit is considered less prestigious than the Ninth, the Washington Blade notes, so national media have dubbed Bumatay the highest-ranking out federal judge.

Some Democrats objected to Bumatay because of his lack of judicial experience. He has been a federal prosecutor in San Diego and at the time of his nomination last year was on temporary assignment at the Department of Justice, working on efforts to address the opioid crisis and fight organized crime. He worked for the Justice Department during the George W. Bush administration as well. He has clerked for federal judges and worked on the confirmation of three conservative Supreme Court justices, John Roberts, Samuel Alito, and Neil Gorsuch.

He’s a member of the right-wing Federalist Society, which has recommended many judges to the Trump administration, including the most recently confirmed Supreme Court justice, Brett Kavanaugh. Bumatay also edited a conservative legal publication while at Harvard Law School.

Bumatay lacked the support of the senators from his home state of California — Dianne Feinstein and Kamala Harris — as well as that of the Senate’s two out LGBTQ members, Tammy Baldwin and Kirsten Sinema. Many progressive organizations opposed his appointment too.

“Patrick Bumatay is yet another Trump judicial pick who is opposed by both of his Democratic home-state senators and whose main ‘qualification’ is his right-wing ideology and party loyalty,” said Marge Baker, vice president of policy and program at People for the American Way, in a prepared statement. “When directly asked about past prosecutorial misconduct on his part, which he had not disclosed, Bumatay failed to explain or even acknowledge that it happened. His answers at his confirmation hearing to questions that could shine a light on how he would approach the cases before him were uninformative, unhelpful, and disrespectful. But he has a long history of Republican political activism and was a leading cheerleader for Neil Gorsuch’s confirmation to the Supreme Court. That made his confirmation a slam-dunk according to the Trump-McConnell playbook for judicial nominations.”

Lena Zwarensteyn, fair courts campaign director at the Leadership Conference on Civil and Human Rights, also issued a statement, saying Bumatay “is part of Trump’s shameless effort to reshape the Ninth Circuit.” She added, “He has served as a political operative in the Trump administration and has pushed a far-right agenda.”

One LGBTQ group praised Bumatay’s confirmation — the Log Cabin Republicans. “He is an accomplished prosecutor with solid experience, and we’re thankful to President Trump for pushing forward with Patrick’s nomination and the Senate confirming him, knowing he would never get a fair shake from his home-state senators,” Managing Director Charles Moran said in a statement to the Blade. “I know all Americans will welcome Patrick’s arrival on the Ninth Circuit, bringing some sanity back to the circuit most known for being out of the mainstream.”

Some anti-LGBTQ activists and publications had spoken out against Bumatay despite his conservatism. Tim Wildmon, president of the virulently homophobic American Family Association, wrote a blog post last month urging senators to reject Bumatay, citing the nominee’s “past and current membership in radical activist groups including Tom Homann LGBT Law Association (THLA), DOJ Pride, and Log Cabin Republicans.” Wildmon made the baseless claim that these groups seek “to force Christians to abandon their religious faith and surrender to the homosexual agenda.”

The Senate may vote as early as Wednesday on the confirmation of Trump’s other Ninth Circuit nominee, VanDyke, who has an intensely anti-LGBTQ record and is opposed by many civil rights groups. Senators voted Tuesday to end debate on his nomination — again along party lines, with 53 Republicans in favor, 39 Democrats and one independent opposed — setting the stage for a confirmation vote soon. At a hearing before the Senate Judiciary Committee in October, VanDyke denied that he’s anti-LGBTQ, tearing up at the question. But his record shows opposition to marriage equality, although he says his views have changed, and support for the right to discriminate against LGBTQ people in the name of religious freedom.