November 30, 2019 (Windy City Times) — A ceremonial investiture took place for Judge Mary M. Rowland — the first out lesbian to serve on the U.S. District Court for the Northern District of Illinois — Nov. 25 at the Dirksen U.S. Courthouse in the Loop. 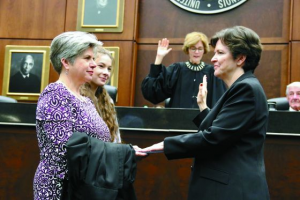 Addressing the packed house of well-wishers, Matthew J. Piers—who worked with Rowland at Hughes—called a motion for U.S District Court for the Northern District of Illinois Chief Judge Rebecca R. Pallmeyer to administer Rowland’s oath of office in the well of the U.S. district courtroom.

After Rowland was sworn in — with her wife, Julie Justicz, and their daughter, Lilly Rowland, by her side — the audience gave her a standing ovation as she donned her robe and joined her colleagues on the bench. (Rowland and Justicz’s son, Thomas Rowland, was unable to attend due to college commitments.)

“To the LGBTQ community, I am so proud to be your sister,” said Rowland in her remarks. “Our community has had incredible successes…and a lot of that has been because many of us have come out and demanded to be treated with dignity and respect. I am keenly aware of my obligation to pay it forward and I will be mindful of that [going forward].”

Rowland dedicated this day to her late father, who was also a lawyer; in addition, he was a World War II veteran and advocate of the free press and rule of law.

Durbin spoke about Rowland’s many years of service and the 10-year nominating process that led to this day while Lightfoot chronicled her long friendship with Rowland that began when both were undergrads at the University of Michigan.

Lilly got laughs when she spoke about her mother’s inability to complete simple household chores. She also said her mother is an extraordinary judge and advocate for LGBTQ rights, and because of this, “I am inspired to achieve my dreams and never give in to barriers.”

Sawyer spoke about her friendship with Rowland that began in the 1980s as well as the days when LGBTQ people could not count on the law to protect them from discrimination in Illinois.

Murphy said that from the beginning of their work relationship he knew Rowland would achieve great things because of how she did her job.

Pallmeyer also gave Rowland three symbols of her new position — a gavel, the U.S. flag and a copy of the order Pallmeyer entered on Aug. 22 that started Rowland’s duties as a member of the U.S. District Court.

A reception followed at the Chicago Bar Association’s offices in the Loop.