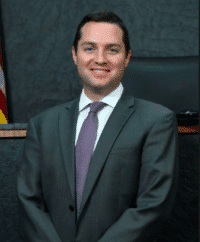 A graduate of the Western Michigan University Law School, Cunningham has spent the past three-and-a-half years serving as a judicial staff attorney under Oakland County Circuit Judge Mary Ellen Brennan. The position has given him experience in the three dockets of the circuit court: the Civil/Criminal Division, Business Court and the Family Division. He said that in 2019 he will “hit the ground running.”

“The people elected me and put their trust in me to be a prepared, knowledgeable, compassionate and empathetic judge. I will be serving in our court’s family division and I promise to embody these qualities on the bench,” he said. “It feels like a natural progression. Judges have taught me knowing it’s my passion and goal to be a judge. Brennan has been really gracious in letting me know her process, what’s going on in her mind and what she’s looking for. I’ve been taught by the best, so I’m ready to go…I will also attend ‘New Judges School’ the first week of January and be planning my swearing-in ceremony.”

Though his position is non-partisan, commenting on the “blue wave,” he said it was “an expression used to energize voters and activists.”

“The 2018 election saw an unprecedented number of candidates from very diverse backgrounds, locally and nationally, running for office,” he said. “I feel honored to be elected as the first openly LGBTQ person to the Oakland Circuit Court and one of only a handful of openly gay judges serving in our state.”