Judge G. Helen Whitener Honored as 2019 Woman of the Year

Judge G. Helen Whitener has been honored by the Seattle University School of Law with its 2019 Woman of the Year Award. The Woman of the Year award recognizes an accomplished leader who is committed to women’s issues, and is a role model for future members of the legal profession in Washington State. 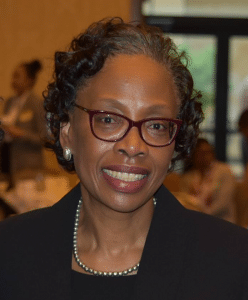 Judge Whitener was appointed to the Pierce County Superior Court in 2015 by Governor Jay Inslee. Prior to her appointment and subsequent election to the superior court, Judge Whitener served as a judge on the Washington State Board of Industrial Insurance Appeals, and as a pro tem judge in Pierce County District Court as well as the Tacoma Municipal Court. She had previously worked as a prosecutor and a defense attorney.

Judge Whitener is very active locally, nationally and internationally, and speaks often on human rights, access to justice, and the rights and responsibility of the judiciary in ensuring the right of all that appear before the court to basic dignity and respect in judicial proceedings. In 2015, at the request of the U.S. Embassy, Judge Whitener visited her home country of Trinidad and Tobago to speak on human rights. In 2017, Judge Whitener adapted and organized a Color of Justice NAWJ event for her court. The event was a resounding success, and the SCJA has agreed to sponsor three events throughout Washington State. Judge Whitener also has done a TEDx Port of Spain talk entitled, “Claiming Your Identity by Understanding Your Self-Worth.”