On a recent Tuesday, a large courtroom at the Eastside District Court at North Avenue and Harford Road was busy with veterans, mentors and representatives from organizations such as the Red Cross and United Way—as well as a few dogs and humans from Warrior Canine Connection. And although courtroom procedures were handled with the expected efficiency and professionalism of a district court, the warmth, support and comradery that filled the room was unusual in a system that can often feel intimidating and impersonal.

Much of that warm feeling is attributable to Judge Halee F. Weinstein, 57, who oversees the Veterans Treatment Court, which is in session two Tuesdays a month to help veterans in the criminal justice system get their lives back together.

As the women and men of all ages stepped up to the bench to address Weinstein, each was joined by a mentor—also a veteran—who helps them navigate the system and provides emotional support. Some were also accompanied by service dogs, which are sometimes trained by veterans as part of their required community service. 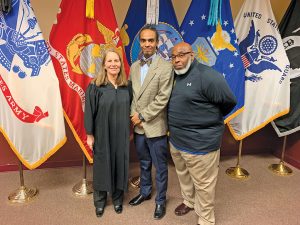 “I was expecting to get a slap on the wrist,” said U.S. Navy veteran Eric Brown, 37, who was graduating from the Veterans Treatment Court program after 18 months. “But that wasn’t happening here. They said, ‘We’re going to rebuild you.’ Come to find out that the judge was a lieutenant and the way she took her time—she didn’t have to take my case—made me want to be a part of the changing of myself.”

Brown served in the military from 2003 to 2006 and was trained in high-tech communications. But when his job hunt proved frustrating, he fell prey to negative influences, eventually winding up in court with a misdemeanor drug charge. He was then diverted to the Veterans Treatment Court, which gives people with prior military service who have been charged with crimes the opportunity to participate in individualized programs to get their lives back on track. Participants are provided with treatment for mental health issues or substance abuse challenges, if needed, as well as given access to an array of education, employment and housing resources. The goal of the program, which has no set timetable, is to get veterans back into a stable and well-functioning life.

Weinstein launched the court in 2015 after she witnessed many veterans coming through the court system with myriad challenges—many of them related to drug use, homelessness and unemployment. It was clear there was a need for a more focused approach.

“I said, ‘Let’s start a veterans docket,’” she recalled. “Because veterans like to be with veterans. We understand each other, we feel most comfortable with each other.”

The Journey to Judgeship

The daughter of the late Lt. Gen. Sidney T. Weinstein, an Army intelligence chief with 33 years of service, Weinstein was born at the Philadelphia Naval Hospital and grew up on Army bases in more than a dozen locations—from Haddonfield, New Jersey, to Kaiserslautern, Germany.

A high school athlete, Weinstein headed to Campbell University, in Buies Creek, North Carolina, on a softball scholarship and majored in physical education. She also did an ROTC program.

The day after graduation, she drove from Buies Creek to the Fort Huachuca base in Arizona, where she began officer training at the military intelligence center her father commanded. After six months, she was assigned to Fort Bragg, North Carolina, in the 525 MI (military intelligence) Brigade, 18th Airborne Corps.

The next part of her story, although painful, is what ultimately catapulted her into her life’s work of service to her fellow veterans.

“I got kicked out of the Army,” Weinstein said. “Because of my sexual orientation, I was forced to resign.”

Years before “Don’t Ask, Don’t Tell” allowed gay and lesbian soldiers to serve (as long as they did not disclose their sexual orientation), Weinstein had to choose between an administrative discharge and resignation. She chose the latter.

“It was very hard for me to leave and also to leave under the circumstances that I left under,” she said. “To be told that I was not fit to serve my country.”

Throughout the ordeal her parents were completely supportive, even though her father was the highest-ranking military intelligence officer in the U.S. Army. He would later lobby Congress in support of gay and lesbian soldiers.

“I was losing my job and my career and my livelihood and I had to find something to do,” Weinstein said. “My father always talked about taking care of soldiers; that if you take care of soldiers, your soldiers will take care of the mission. And when I left the military, I missed that.”

“So I went to law school,” she said, with a smile.

After completing law school in 1989, Weinstein worked as a law clerk, a litigation associate and then as a Baltimore assistant state’s attorney. In 2002, she was nominated as an associate district court judge by then Gov. Parris N. Glendening and was confirmed in early 2003.

In 2014, she became the judge-in-charge of the Eastside District Court. “I’ve been here ever since,” she said.

Though Weinstein was inspired to create the veterans court in part by her own experience, she knew she couldn’t make the diversionary program—one of 334 nationwide—happen alone. So she and her staff created partnerships with numerous entities, including the U.S. Department of Veterans Affairs, United Way of Central Maryland, the American Red Cross, Back on My Feet, The 6th Branch, Potential Me, Sharp Dressed Man and the Warrior Canine Connection, as well as numerous other state and local programs dealing with health care, homelessness, education, employment and legal aid.

As the first district court in the state to focus on the needs of veterans, the court stresses rehabilitation rather than incarceration.

Christopher Buser, chief of social work at the VA Maryland Health Care System, said the Veterans Treatment Court has improved the lives of close to 100 veterans. Of those, about 60 have graduated, and none of them have been convicted of a crime since their participation.

“By treating issues such as unemployment, homelessness, substance abuse, emotional stress and social isolation, the VTC addressed the circumstances which led the veteran to become involved in the justice system,” he said. “Treating the issues at the root of the veteran’s problem, we ensure a better outcome and severely lessen the chances of the veteran being justice-involved in the future.”

A single day at the court shows the range of people Weinstein and her partners are able to reach.

Tyrone Bonds, a 57-year-old U.S. Army veteran who served from 1979 to 1999, saw action in the Gulf War and Desert Storm. A former police officer and court investigator, he is now one of the court’s trained mentors.

Bonds has seen the program turn vets’ lives around. They feel better about themselves, reunite with family members, get treatment and jobs, he said.

The court itself is a lively place. When each person is called to address Judge Weinstein, a boisterous “Huah!” is shouted out by veterans and mentors. It is a statement of solidarity.

“It means you’re strong, we’re all together, we’re striving to do whatever needs to be done,” he said. “It means excellence, honor. It means, I’m here.”

Program graduate Eric Brown worked many community service hours with the court and with The 6th Branch, a veterans volunteer organization that cleans up vacant lots and works with city schools.

“The secretary of the Veterans Affairs said, ‘What were you like the day you signed up and raised your right hand?’” Brown recalled. “And that hit me like a hurricane. I started acting right, I started making my appointments. I started getting away from people that were actually hurting me.”

When veterans begin the program, they take an oath—not unlike the one they took when they entered the service—promising to uphold the values of the Armed Forces, to carry themselves with honor and dignity, and to respect the country and the memory of those who died in service.

“This court saved me from going downhill,” Brown said. “I have too much going on for me to be where I was at. I’m proud of myself.”

Later, to mark his graduation, Brown, smiling in a suit and bow tie, posed for pictures with Weinstein, his mentor and others who were instrumental in his transformation.

Army vet Jonathan Goff found himself in Baltimore City jail in August 2018 for stealing a car in Nashville. A member of the 82nd Airborne, the South Florida native served from 2002 to 2006, including an extended tour in Iraq.

“I was addicted to painkillers and benzos. I was homeless and I was using,” Goff said. “I took off with a friend of mine’s car without asking permission.”

His public defender told him about Veterans Treatment Court.

“I can’t tell you how much of a blessing—it’s been huge,” he said. “Judge Weinstein is one of my favorite people in the world and she’s also a former paratrooper. We have a bond there. She’s firm, but her heart’s full of grace and mercy.”

Goff has been clean since August and said he feels “a whole lot better.” He has been performing community service, has a job at Maryland Center for Veterans Education and Training (MCVET) and is getting help with housing.

As he approached the bench to talk to Weinstein about his progress in the program, Goff had a question. He asked for permission to go to New York to try out for the television show “The Voice.”

When Weinstein asked what he was going to perform for his audition, the soft-spoken 35-year-old sang a stirring a cappella version of Leonard Cohen’s “Hallelujah.”

There was a huge round of applause and Weinstein, after checking on his progress, granted his request.

“When Mr. Goff came to us, he was a mess,” Weinstein said. “Now he is in MCVET and he is doing wonderfully.”

Serving the needs of veterans who have substance use disorders or mental health issues is challenging, Weinstein said.

“It’s very difficult to serve the needs of our combat veterans who are suffering from post-traumatic stress disorder, traumatic brain injury, military sexual trauma,” she said. “But they are all committed to making their lives better through this program.”

For Goff, being involved in Veterans Treatment Court has changed his life “drastically.”

“I don’t know what the future looks like, but just the opportunity to be shown nothing but grace and mercy and a lot of mentoring and leniency — you can see how much they care,” he said. “[Weinstein] pushes, but it’s a pushing because she really cares about her vets. I don’t know how else to say that. It means a lot to me.”

Weinstein awards graduates and those who are doing well in the program with “challenge coins,” along with dog tags with words like “honor,” “courage,” “resilience” and “dedication,” as well as bus tokens and gift certificates.

Rabbi Chesky Tenenbaum, director of Jewish Uniformed Services of Maryland and a military and law enforcement chaplain, met Weinstein at a veterans event. He has high praise for the program for giving veterans another chance.

“After everything that they’ve been through, this is definitely a help to the veteran to be able to take back control,” Tenenbaum said. “Veterans I have dealt with who unfortunately suffer from PTSD have a lot on their plate, and to have a program to help them go back into regular life is so important.”

For Weinstein, the best part of presiding over veterans court, which has a motto of “Leave No Vet Behind,” is watching the veterans change their lives.