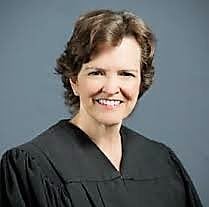 Rowland, an out lesbian, is his choice for a lifetime seat on the U.S. District Court for the Northern District of Illinois. She’s been a magistrate judge on the court since 2012, which means she’s been assisting the district judges there. She previously spent 12 years as a partner at one Chicago law firm, and 10 years working at another, the Federal Defender Program of Chicago.

Rowland’s nomination is remarkable for two reasons. Out of Trump’s nearly 140 district and circuit court nominees to date, she is the only one who is openly gay or lesbian. Beyond that, nearly one-third of his judicial nominees have anti-LGBTQ records.

Illinois Democratic Senators Dick Durbin and Tammy Duckworth, who played a role in Rowland’s nomination, sang her praises after Trump’s announcement. Rowland was one of three people nominated to the Illinois court on Thursday.

“They have the qualifications, integrity, and judgment to serve with distinction as district court judges in the Northern District of Illinois,” the senators said in a joint statement. “We appreciate the Administration’s willingness to work with us and with our nonpartisan screening committee to reach consensus on nominees who will serve the people of Illinois well.”

A White House spokeswoman did not respond to a request for comment on whether Trump is proud to announce an LGBTQ judicial nominee.