Justice Michael Kirby Weds 50 Years After That Summer of ’69

Fifty Februaries ago, former High Court Justice Michael Kirby met a dashing Dutchman called Johan van Vloten on a hot summer’s night at the Bottoms Up bar of the old Rex Hotel in Kings Cross. On Monday night, half a century to the day later, the two men were married before family and close friends at their Bondi Junction home. 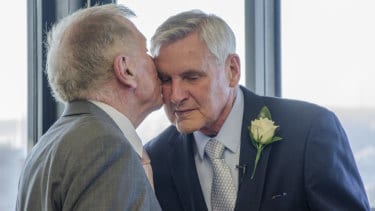 It was a small celebration for a big love affair.

“They explored the world and each other. They liked what they discovered,” the celebrant Michelle Bailey told the crowd. In the private ceremony, with Justice Kirby’s brother Donald, and Mr. van Vloten’s nephew Len acting as witnesses, those gathered heard that the marriage of these two men was “proof positive of the capacity of love to prevail over obstacles, hostility, change and the passing of time”.

Although within weeks of their 1969 meeting, the two were introduced and accepted by their respective families, it would take 25 years for their homosexual relationship to become enshrined in federal law in 1994, and another 48 before they could marry in Australia.

“Together they suffered the loss of beloved family members. They also lost precious friends to the scourge that was, and still is, AIDS,” said Ms Bailey, who is also a research scientist and HIV clinical trial coordinator at the Kirby Institute, the national research centre founded in 1986 in response to the HIV/AIDS epidemic, named in his honour and where he is patron.

Justice Kirby, who turns 80 next month, said he knew since 1956, as a student at Fort Street Boys High School that he was gay, but had not felt a special need to be married now same-sex marriage was legal. 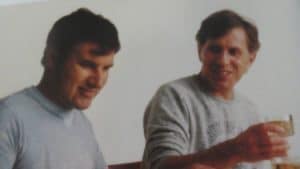 The couple, pictured here in Rose Bay in 1996, had their story “written on their hearts,” said celebrant Michelle Bailey.

“Tonight’s step is not therefore even a ‘new beginning’. They insist that it is a continuation of what began 50 years ago,” Ms. Bailey said. “Those who are here already know their story. And those who are not here, and are interested, can find it described readily enough. For Johan and Michael themselves, their story is written on their hearts.”

Ms. Bailey said on a whim she “reached out to Michael by email as I saw he had featured in a newspaper article that circulated about work around the time of same-sex marriage being legalised. I informed him that I worked at the Kirby Institute, that I too am in a same-sex relationship but also that I am a celebrant, ‘Michelle the Shellibrant,’ and that I wanted to offer my services if Michael and Johan ever did decide to marry.”

Last November, they chose to take her up on the offer.