September 6, 2019 (New York Law Journal) — Justice Rosalyn Richter, who joined the Appellate Division in March 2009, confirmed Friday that she had given notice of her plans to step down over the past week, though she said plans to stay on until summer 2020, in part to help ease the transition process. 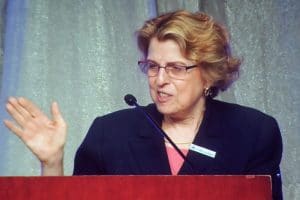 Her departure would be expected to worsen a shortage of judges on the court by creating a sixth opening on the First Department bench as Gov. Andrew Cuomo’s office continues to conduct interviews for previous vacancies, including those created by Justices John W. Sweeny Jr. and Marcy L. Kahn.

“I’m very glad she did that,” said Justice Rolando T. Acosta, the court’s presiding judge. “She wanted to make sure everybody had enough time to deal with the vacancy.”

In an interview, Richter said that the time had come to move on after having served more than 30 years in the state court system, including 10 years with the First Department. An adjunct professor at Columbia Law School, Richter said she would continue teaching and planned to remain involved with the courts.

“I’m going to take this time to explore my options,” she said. “I am not retiring from my involvement in the legal profession.”

Elected as a Supreme Court justice in 2002, Richter has presided over general general civil IAS part, guardianship matters and a matrimonial part, according to her biography on the state courts website. She also served as an acting Supreme Court Justice, presiding over felony criminal matters in Manhattan from 2000 to 2002.

Prior to her time with the state courts, Richter was executive director and special project attorney for Lambda Legal Defense and Education Fund and later worked as supervisor of the appeals bureau for the Office of the Kings County District Attorney from 1983 to 1987.

On Friday, Richter said she was most proud of her role in expanding the use of technology and increasing access to the courts for people with disabilities. She reflected on the changes that have made the courts far more diversity than they were when she began serving three decades ago at the age of 34.

“I’m proud that the court and society have given opportunities to so many different kinds of people,” she said.

Acosta on Friday praised Richter for her energy and productivity on the bench.