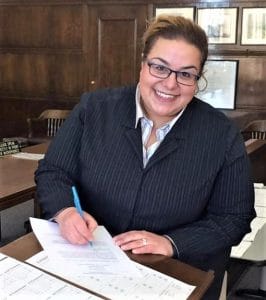 Satarzadeh, 41, who earned her law degree from Golden Gate University, was named a commissioner in June. Her first official day on the job, handling traffic cases in Fremont, was Monday, August 27.

“It is quite a juggling act but the best job I have ever had, by far,” said Satarzadeh, who lives in Alameda. “I am super excited about it.”

“To work with her is a privilege,” Colwell said, adding that after several years in the civil division, Satarzadeh went on to assist criminal court judges in a hybrid position combining the two.

Satarzadeh’s younger brother, Patrick, spoke of his sister’s upbringing. She attended first grade in Iran, second grade in London, third grade in Turlock, fourth grade in Orange County, and fifth grade in San Jose, where the family settled. In short, he told the audience, she had to make new friends regularly.

“She has a really big heart,” Patrick Satarzadeh said. “She’s also an amazing cook and also has a lot of passion. She is someone I will always look up to.”

Superior Court Judge Robert McGuiness, who had Satarzadeh as a research attorney, said, “She has a first-rate analytical mind and a healthy dose of common sense. I believe strongly that this is only the beginning of what is to come in her long career.”

Remarking on Gertrude Stein’s famous quip about Oakland, “There’s no there there,” McGuiness said of Satarzadeh, “With you here, there’s a lot of there here.”

During her remarks, Satarzadeh thanked the court’s personnel committee, which recommended that Presiding Judge Wynne Carvill select her for the commissioner’s post.

“What an emotional day,” she said. “It’s like your wedding day, only for the law.”

She also thanked her parents, who left everything behind in Iran to come to the U.S. to begin a new life.

Reese Aaron Isbell, emeritus board member of the Alice club who co-chaired the club with Satarzadeh, said he was happy for his friend.

Superior Court Judge Tara Flanagan, a lesbian who won re-election in June, praised Satarzadeh, noting her appointment reflects the diversity of the county.

“I couldn’t be happier for Bentrish and the people of Alameda County to have such a legal scholar appointed commissioner,” she told the Bay Area Reporter.

“It was a pleasure working with Bentrish as my research attorney, and I am excited that I will get to have her as a colleague as a bench officer,” Kolakowski said. “Unlike some attorneys, she knows that the law is not just a collection of abstract concepts – she understands that we deal with real people trying to resolve real problems.”

At some point, Satarzadeh would like to become a judge on the East Bay bench.