January 4, 2020 (News Reports) — The Circuit Court of Cook County has elected Levander Smith, Jr. as one of 15 new associate judges. 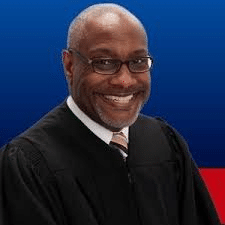 Prior to his appointment on December 5, 2019, Smith was a practicing attorney for over 25 years, primarily in the public sector. He served as an attorney with the Illinois Department of Children and Family Services (DCFS) for the majority of that time. He also served as Regional Counsel, Supervisory Regional Counsel and as Litigation Attorney Supervisor, where he worked to protect and ensure the safety and well being of the children and families of Illinois.

Smith serves on the board of directors of the association’s LGBTQ section, and is a member of the Lesbian and Gay Bar Association of Chicago. He received his law degree from the University of Kansas School of Law in 1991 and his undergraduate degree from Washington University, St. Louis.

The new judges, along with all associate judges, face a yes/no retention vote by the circuit court judges in July 2023.

“The Nominating Committee employed a comprehensive approach in the nomination process that considered multiple aspects such as a variety of legal experience in the public and private sectors, and diversity of race, ethnicity and gender,” Chief Judge Timothy Evans said in a release announcing the 30 finalists.