In an election season that offered a mixed bag of results, at least one San Antonio LGBT candidate is celebrating a victory and thanking the community for its help. 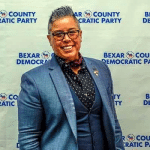 Attorney Rosie Gonzalez scored a solid victory in the race for Judge of County Court No. 13, garnering 57 percent of the vote against Republican incumbent Crystal Chandler.

This was Gonzalez’s second run at the County Court 13 seat. In 2014, she ran unopposed in the Democratic primary and went on to the general election to face off against Chandler, a former Bexar County assistant criminal district attorney.

The second time was the charm for Gonzalez, who ran a bare bones campaign, relying on social media and face-to-face contact with voters.

“No signs, no commercials, no push cards, no calls, no shirts, no caps, no bumper stickers. Grassroots 100 percent,” she told Out In SA last year when she announced her candidacy. “The campaign strategy will focus on getting our message out to as many voters as possible before work, during lunch, on limited evenings and weekends.”

That plan of action proved a winning one for Gonzalez, whose victory was evident when early voting numbers showed her leading the race.

In a statement shared on social media, Gonzalez said, “I want to thank all those who helped in this effort: God, my family, Stacy, Cassie, friends, volunteers, colleagues, the Bexar County Democratic party, voters, LULACs Orgullo Council, Stonewall Democrats, CWA Union, all who provided endorsement videos & photos, texted family and friends…everyone who had a hand in this, mil gracias. The work is only beginning. Stay with me and together we will do great things. This I know.”

Born and bred in Brownsville, Texas, Gonzalez has lived in San Antonio for over 30 years and has a family law practice. She attended St. Mary’s University where she received a Bachelor of Arts in Political Science and later her law degree.

“I decided to run because I believe I can bring real life experience to that bench, offer innovative perspectives as to how to best serve victims and hold perpetrators accountable, and add diversity to the judiciary in Bexar County,” she said.