LGBTQ Lawyers and Judges Raise the Bar at 2019 Lavender Law

August 15, 2019 (Philadelphia Gay News) — In its highest attendance to date, the Lavender Law Conference took place in Philadelphia for the first time since 2002. Orchestrated by the LGBT Bar Association, the conference is a three-day series of panel discussions, networking events and the largest minority career fair for LGBT-identified legal professionals across the country.

Presentations ranged in subject matter, from proper vocabulary for gender nonbinary and intersex lawyers, to reproductive rights for LGBTQ people and even environmental law.

The need for a cultural change in legal settings was a common thread that pervaded many of the panel discussions at this year’s conference.

“Changing how we think about things, how we represent, for example transgender issues, pronouns, how to stand in solidarity,” said James Vandermark, a bankruptcy and tax lawyer and chair of the Gay and Lesbian Lawyers of Philadelphia (GALLOP.) “I think those were overarching themes in a lot of the courses and the conversations at the conference.”

The issue of freedom of religion versus nondiscrimination laws also came up frequently during the conference.

“It’s going to be chipping away, especially the employment nondiscrimination issues,” said Amanda Dougherty, real estate tax lawyer and vice chair of GALLOP. “That’s going to be something that’s impacted in terms of how lawyers who practice in the area, how much work they have, and also in terms of any backlash that people face; law students coming out of law school are going to be cognizant of where they’re practicing because of the policies.”

As a lawyer practicing in the areas of assisted reproductive technology, adoption and family law litigation, Philadelphia judicial candidate Tiffany Palmer is the director of the Family Law Institute as part of the LGBT Bar Association and the National Center for Lesbian Rights.

The ongoing battle for LGBT parental rights as they relate to the marital status of parents was a prominent topic this year at the Family Law Institute, one of several venues of discussion among lawyers who practice in a particular area of law.

Some of those cases in Pennsylvania involve same-sex married couples where one spouse has given birth, and although the name of the other parent is on the child’s birth certificate, the nonbiological parent may find that, in the event of a divorce, their parental rights are challenged because they did not legally adopt their child.

“It’s so difficult right now when you have states that have completely opposite statutes and laws,” Palmer said. “In one state, surrogacy is legal and regulated by statute, and in another state it’s criminalized.”

Palmer would like to see more states pass the 2017 Uniform Parentage Act, “so that we can have more laws that include LGBT families, same-sex married couples and protections for families who conceive through assisted reproductive technology,” she said.

Palmer received the 2019 Leading Practitioner’s Award, honoring her as an attorney who has improved the lives in the LGBTQ-plus community due to “outstanding” legal work. Her partner Lee Carpenter, professor at Temple’s Beasley School of Law, spoke on a few panels, including Advocating for LGBTQ-plus Issues in Law Schools. Gloria Melunis, another Philadelphia lawyer recognized for her excellence, was included in the Best LGBTQ-plus Lawyers Under 40.

Both Palmer and Judge Daniel Anders noted the panel, “Turning Crumbs into Wedding Cake: What We Can Learn from the Historic Role of State Courts in Relationship Recognition,” led by Nan Hunter, Bennett Klein, Beth Robinson and Matthew Skinner.

Robinson was one of the lawyers responsible for obtaining recognition of the first civil unions in the U.S., which at the time occurred in the state of Vermont. “It kind of went full circle with her from an advocate to an arbitrator,” Anders said.

At this year’s “Gayla,” which was very well attended, members of GALLOP and co-organizers displayed mementos from the last time the conference took place in Philadelphia in 2002 — like an enlarged conference program showing committee-meeting minutes from when GALLOP was in charge of planning the conference, and a newsletter announcing the very first LGBT Bar career fair. At the time, Palmer, Carpenter, David Rosenblum and Cletus Lyman were on the planning committee.

“The Philly presence was strong for sure,” Dougherty said.

“Just the dramatic growth of the conference, it was such a stark change since 2002,” Vandermark said. 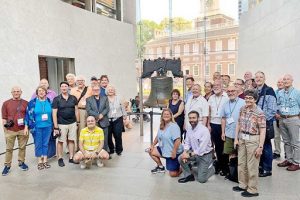 Members of the IALGBTQ+ Judges visit the Liberty Bell

Like the LavLaw conference, the International Association of LGBTQ+ Judges, which took place in conjunction with LavLaw this year and of which Anders is president, experienced an unprecedented number of attendees. Over 50 judges were in Philadelphia for the conference and the annual meeting of judges. Membership increased four-fold since Anders became president two years ago.

“Whenever you have more engagement, it leads to better results,” Anders said.

At the Judicial Education Institute, which consists of “judges teaching judges,” Anders explained, Judge Mike Jacobs, the only openly bisexual judge in the world, led a discussion about transgender, nonbinary and bisexual-identified people as related to proper pronoun use, and various legal matters that may come up surrounding those identities.

In addition to legal education and discussion, members of the association also enjoyed a couple of cultural outings, including a tour of Independence Hall.

“We left feeling energized,” Anders said. “Particularly there were two judges who want to expand our judicial education not only for us, but also contact the state courts across the country and say, ‘Here’s programs we’ve done, you might find them helpful to your own judges in your state.’”