August 5, 2019 (Washington Blade) — With little fanfare, the U.S. Senate confirmed lesbian judicial nominee Mary Rowland to a seat on the federal bench in Illinois, marking the first confirmation to the judiciary of an out LGBT Trump nominee. 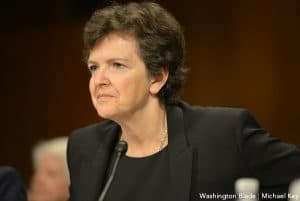 The U.S. Senate confirmed Rowland — who has ties to the LGBT group Lambda Legal — to a seat in the U.S. District Court of Northern Illinois by voice vote on Wednesday with no recorded opposition.

Rowland’s nomination, which President Trump first announced in June 2018, languished in the Senate for more than a year even though she enjoyed a breezy confirmation hearing before the Senate Judiciary Committee. The American Bar Association rated Rowland as “well qualified” for the position.

Although Rowland, 57, is a Trump nominee, her record contradicts the trend of his anti-LGBT appointments and includes work in LGBT advocacy. Rowland’s affiliation with LGBT legal groups includes being a member of the Lesbian & Gay Bar Association of Chicago and pro bono work for Lambda Legal.

During her confirmation hearing, Rowland wasn’t shy about referencing her spouse, Julie Justicz, and their two adult children.

Trump’s nomination of Rowland is the result of an agreement between the White House and Sens. Richard Durbin (D-Ill.) and Tammy Duckworth (D-Ill.), the home state senators of Rowland who both granted their “blue slips” to allow her nomination to proceed in the Senate Judiciary Committee. (During Rowland’s confirmation hearing, Durbin said, “That’s the way the process is supposed to work.”)

Following Senate approval of Rowland and Martha Pacold to a seat on the U.S. District Court of Northern Illinois, Durbin and Duckworth issued a joint statement commending the bipartisan nature of their confirmation process.

“We are pleased that the Senate has confirmed Martha Pacold and Mary Rowland,” the senators said. “They have the qualifications, integrity and judgment to serve with distinction as district court judges in the Northern District of Illinois. We appreciate the administration’s willingness to work with us and with our nonpartisan screening committee to reach consensus on nominees who will serve the people of Illinois well.”

Both Duckworth and Durbin took to Twitter to praise Rowland’s confirmation and called her the first openly LGBT person to serve in the federal judiciary in Illinois.

To be sure, many of the nominees Trump has picked for the judiciary have anti-LGBT records. Among them is U.S. Circuit Judge Kyle Duncan of the U.S. Fifth Circuit Court of Appeals, whose anti-LGBT record includes defending a Virginia high school in litigation seeking to block transgender student Gavin Grimm from using the bathroom consistent with his gender identity.

Another is U.S. District Judge Matthew Kacsmaryk, who voiced support for Kim Davis and worked for the First Liberty Institute, an organization seeking a First Amendment right to allow businesses to refuse to make wedding cakes for same-sex couples.

Throughout his first two-and-a-half years in office, Trump has stocked the judiciary with his judicial selections. At his rallies, Trump likes to brag about the Senate having confirmed 146 of his judicial picks, which he says is second only to the first U.S. president George Washington.

The White House didn’t respond to the Washington Blade’s request to comment on whether Trump was proud to have an out lesbian among his nominees confirmed to the federal judiciary.

Elliot Imse, a spokesperson for the LGBTQ Victory Institute, said in an email to the Blade Rowland is “a rare bright spot among the many anti-LGBTQ activist judges nominated by this administration.”

“We are thrilled such an accomplished and well-qualified jurist as Mary Rowland will be serving on the U.S. District Court of Illinois — adding much-needed diversity to the federal bench,” Imse said.

Imse said Rowland is “one of less than a handful of openly LGBTQ appointees in this administration,” recalling the Victory Institute’s Presidential Appointments Project helped Obama name more than 300 LGBT appointees.

“Sadly, this administration has no commitment to diversifying his appointments or the federal bench, but we are proud of Judge Rowland and know she brings an important perspective to a judiciary that often lacks that perspective,” Imse said.

Trump has appointed another openly gay judicial nominee, Patrick Bumatay, for a seat on the U.S. District Court for the Southern District of California, but his nomination remains pending before committee and doesn’t enjoy bipartisan support like Rowland.

When Trump first nominated Bumatay, the seat was for an appellate position on the U.S. Ninth Circuit Court of Appeals. Sens. Dianne Feinstein (D-Calif.) and Kamala Harris (D-Calif.), however, expressed disappointment, on the basis his name wasn’t among the choices they recommended for the seat. Trump subsequently withdrew the nomination and named Bumatay for a seat on a trial court.

With the retirement of U.S. Circuit Judge Alex Kozinski, however, media outlets have speculated Trump would make another attempt and appoint Bumatay to the now vacant Ninth Circuit seat. Any such change has yet to take place.