November 1, 2019 (The Atlanta Journal-Constitution) — Georgia Gov. Brian Kemp announced Friday his selection for a new seat on the Gwinnett County Superior Court bench — and his choice appears to mark the first time he’s appointed a judge from the LGBTQ community. 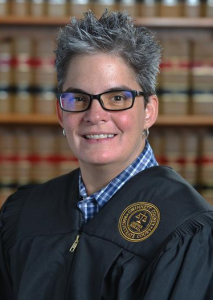 Angela D. Duncan will start her service on Gwinnett’s highest local court in January and be up for re-election to a full four-year term in 2022.  The position she will fill — the 11th Superior Court judgeship for Gwinnett — was created earlier this year by the state legislature to help Georgia’s second-largest county keep up with its ever-growing caseload.

Duncan has worked as a Gwinnett County Magistrate Court judge and chief judge for the city of Chamblee’s municipal court. She served in the U.S. Army Reserves from 1987 to 1995 and has a law degree from John Marshall Law.

She lives in Lawrenceville with her wife Michele and their two children.

“It is with tremendous gratitude and appreciation for the confidence placed in me by Governor Kemp that I accept this appointment,” Duncan wrote in a statement to the AJC. “I will continue to serve the citizens of Gwinnett County with the same dedication that I have served them over the last 15 years as a magistrate judge. I look forward to serving beside those who have been my role models and mentors during my career.”

It was not immediately clear if Gwinnett County has ever had an openly LGBTQ person serve as a Superior Court judge.

If not, the appointment of Duncan would mark the second time this year that Kemp has helped make history at the Gwinnett County courthouse.

Whitner became the first African-American to ever serve on Gwinnett’s Superior Court bench.