August 1, 2019 (Philadelphia Gay News) — Judge Daniel Anders was the first openly gay man to run for office in Philadelphia and be elected as a judge in the state of Pennsylvania. 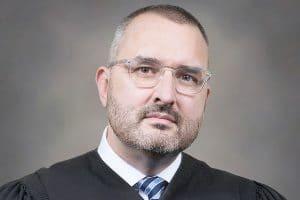 Nominated in 2007 by Governor Ed Rendell and confirmed by the Pennsylvania State Senate, Anders ran for judicial office in 2009 and won citywide. He followed Judge Ann Butchart, the first openly LGBTQ person to be elected to office in Philadelphia in 2005. Anders currently serves in the civil branch of the Trial Division of the Philadelphia Court of Common Pleas.

Though the rules of judicial conduct prohibit Anders from advocating for LGBTQ-plus rights in the courtroom, he serves as president of the International Association of LGBTQ+ Judges. Their annual meeting happens to take place in Philadelphia this year, coinciding with the LGBT Bar Association’s Lavender Law Conference, in Philly from August 7-9.

“We look at increasing the visibility of our judges, educating people on LGBT issues, and getting together to provide a social place for our judges to meet and break bread together,” Anders said.

The Association of LGBTQ Judges meeting has a lot of overlap with the LavLaw conference, though the IALGBTQJ also engages in learning sessions in which judges educate judges.

Prior to being appointed to the judicial bench, Anders worked as a litigator for Pepper and Hamilton LLP for nine years. There, he donated hundreds of hours of free, LGBTQ-centric legal counsel to individuals and local organizations, including Philly Pride and the AIDS Law Project of Pennsylvania.

“I used to call them my pro homo pro bono,” Anders said with a chuckle. “It was mostly LGBT rights, everything from defending for the city of Philadelphia’s Domestic Partner Benefits ordinance, to the antidiscrimination ordinance in the city of Allentown.”

The current legal issues facing LGBTQ community are in many ways similar to those of other communities, such as poverty and equal employment.

“That’s why our community is pushing toward the Employment Non-Discrimination Act and the hate crimes bill,” Anders said.

When working as a lawyer, Anders successfully defended an LGBTQ ordinance in the 2005 case of Hartman v. The City of Allentown, in which a landowner refused to rent to members of the LGBTQ community. He filed a lawsuit claiming that Allentown’s antidiscrimination ordinance was null and void.

“We were simply maintaining the status quo, not necessarily advancing,” Anders said. “If we lost that lawsuit, every local protection in the Commonwealth would have been invalidated. It was an important case to maintain our rights.”

Since Anders’ appointment as judge, the number of openly LGBTQ judges in the Commonwealth has only increased.

“At one point we had I believe it was 10 members of the bench which was approaching 10 percent of the bench,” Anders said.

That percentage has decreased due to judges retiring, but Tiffany Palmer is highly endorsed as a 2019 judicial candidate for the Court of Common Pleas, Anders pointed out.

The Court of Common Pleas is overseen by President Judge Idee Fox, who serves on the First Judicial District’s Governing Board. She previously supervised Anders in the Civil Division of the court and has known him for roughly 10 years.

When asked how Anders helps further visibility of LGBTQ attorneys and judges, President Judge Fox said, “Just by his mere presence and his reputation as being a very good judge.”

In his decade plus as a judge serving in the criminal, civil and family divisions of the court, Anders has heard many different cases, including those of children under the care of the Department of Human Services, as well as common criminal cases.

“It’s a very people-oriented job,” Anders said. “Whether it be interacting with jurors or lawyers or parties. I’m a people person, so I enjoy that aspect of it.”

In his position, Anders helps solve problems that people are not able to settle outside of the courtroom.