In late 2014, The Recorder profiled Justice Therese Stewart, the first lesbian to serve openly as an appellate justice in California. 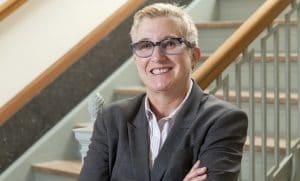 Justice Therese Stewart took her seat on the First District Court of Appeals in August, becoming the first openly gay woman to serve as an appellate justice in California. Stewart, who served for 12 years as San Francisco’s chief deputy city attorney, had no prior experience as a judge. Now, five months into her new role, she talks about the transition and what it’s taught her.

What’s been the most difficult part of jumping into a seat on the bench, with no judicial background?

I am learning about the role at the same time I am learning about substantive criminal law and juvenile dependency law, neither of which I ever practiced. But I have great models here and have always enjoyed learning. And so the challenge is really the same thing that makes the job so great.

What does it mean to you to be the first openly lesbian appellate justice in California?

On the one hand, I don’t feel that anyone on the court treats me any differently because of my sexual orientation. If anything, both the judges and the staff have been incredibly welcoming. I was specially welcomed by a group of the LGBT staff and Justice [James] Humes [the first openly gay man appointed to the state appellate bench]. Their visit during my first week on the job made me aware that my joining their ranks was something that made them proud. I believe that the governor having appointed both an openly gay and an openly lesbian appellate court justice sends a message that LGBT people in this state can aspire to do whatever interests them and that the barriers continue to come down. With all of the openly LGBT people on the trial court bench in this state, and with two now on the appellate bench, LGBT litigants may feel more confident that they will be fairly treated in and by the judicial system.

You’re remembered as one of the lawyers who helped overturn the state’s same-sex marriage ban in 2008, and who later brought same-sex marriage to the U.S. Supreme Court. How does that history affect your current role?

I am fairly well known for that work, and I still have people come up to me and thank me for it on the street from time to time. I still feel lucky to have had the honor and privilege of doing that work. I imagine that having had such a high-profile set of cases played a role in my getting appointed, in the sense that it put me on the radar screen of the governor. But apart from some continued speaking requests that I receive spilling over from that work, it really does not affect what I do in any way I can think of.

What do you miss most about working in the city attorney’s office?

I sometimes miss the fast pace of the work, the uncertainty of what the clients would do next, and the discussions of litigation strategy. But I enjoy here what I sometimes missed there, which was the ability to study cases more deeply and to focus on one case or issue for a significant period of time.

What advice would you give a lawyer preparing to argue a case in state appellate court?

Stand when the court calls your case. Be prepared. Don’t rush. Answer the questions asked in a forthright matter. Treat this as a conversation with the court.

What mistake do attorneys make during oral arguments that you wish you could prevent?

Failing to answer the questions asked. It doesn’t help their cause. It is better to have the best answer you can give to a tough question than not to answer it.

What do you enjoy doing on weekends?

Hike, bike, read, write, spend time with family and friends, see movies, visit museums, listen to music. (And don’t tell anyone, but I also do laundry).

It is a small city with a big attitude. It is populated and governed by people who are forward looking and have vision. It is diverse, more than a little gay friendly, and I have roots here that go back three generations.