Montana Governor Steve Bullock made the appointment on February 5, and Vannatta got the nod of approval from the Senate Judiciary Committee on Wednesday. 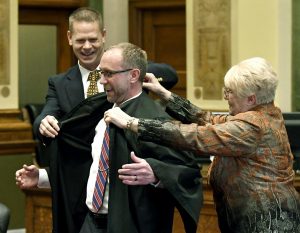 Shane Vannatta is dressed in a judicial robe by husband Jon Freeland and mother Karen at his swearing-in ceremony.

It was standing-room only in the Missoula courtroom for those who came to see the Fourth Judicial District’s newest judge sworn in on Friday. Newly-elected judges sat next to those retired, prosecutors next to criminal defense attorneys, law enforcement officers next to, perhaps, rougher-looking types.

Matt Cuffe, Vannatta’s former law partner and now a District Court judge in Lincoln County, swore him in. Vannatta’s husband and mother carried out the robe once worn by Justice of the Peace Michael Morris, who The New York Times Magazine once described as a beloved figure in the local judicial arena.

Vannatta, who took a run at replacing Judge Ed McLean in 2015, beamed with anticipation on Friday, as well as in an interview with the Missoulian shortly after his appointment. He spoke then about a great respect for the bench and for the judicial system’s many working parts.

It’s a hefty task ahead for someone whose position was created because a study found Missoula needed not one but 2.6 new judges due to growing caseloads.

Hard work was no stranger on the Vannatta family farm and ranch 10 miles outside of Bainville. One could say hard work is an ever-present force for Vannatta, who graduated from the University of Montana with high honors in political science and law school, once served as president of the State Bar in Montana and was until recently a shareholder at Worden Thane.

“It is an awesome responsibility,” he said. “You’re determining credibility, motive, all of these many things that are this human institution of the judiciary.”

Vannatta, 50, is coming to the bench with 18 years of experience as a substitute judge for the Missoula County Justice Court. While developing a career in civil law, he’s come to know the system of which he is now a part, as well as the realities for agencies strapped for resources to address a growing drug problem and an effort to address mental health needs in the community.

As the youngest judge in the district, he said he hopes to help foster innovative solutions to the community’s challenges. That means building on the work that’s already been done with initiatives and pilot programs, such as jail diversion efforts, pretrial services and electronic court filing.

“The ability to make a real difference in the lives of the people who come before you, to craft decisions in a way that can help the situation,” Vannatta said when asked what he was looking forward to about the judge position. “There are conditions you can place in your pretrial conditions or sentencing that can move that person toward wellness and re-integration to society, rather than locking them away.”

The appointment of Montana’s first openly gay judge is historic, although Vannatta does not like to push that point.

The matter was very much a non-issue Wednesday in a hearing before the Senate Judiciary Committee, tasked with vetting the governor’s appointment. Sen. Jennifer Fielder, R-Thompson Falls, was singularly concerned with Vannatta’s views on both the state and U.S. constitutions.

Vannatta will begin his term as a public servant next week. He will take the bench for the first time in March.