August 1, 2019 (Philadelphia Gay News) — The LGBT Bar Association announced that it will grant Tiffany Palmer the national Leading Practitioners Award at the Lavender Law Conference in Philadelphia. The conference, held Aug. 7-9, is the largest LGBTQ+ legal conference and career fair in the country. Palmer is a long-time participant. 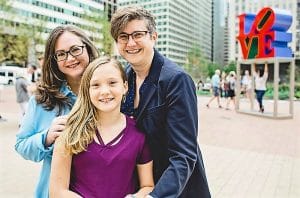 Palmer’s award celebrates her outstanding legal work in the fields of family law, adoption, and assisted reproductive technology law, which encompasses in vitro fertilization. The Association highlighted several of Palmer’s landmark cases as determining their nomination, including a 2018 case before the Pennsylvania Supreme Court in which Palmer argued to expand the definition of legal parents to include same-sex co-parents.

“The last time it was in Philadelphia, in 2002, I was on the planning committee…and we actually created the career fair. It’s now the largest minority career fair in the country, with employees from all over the world essentially coming to recruit LGBT law students for jobs,” said Palmer.

Tiffany Palmer, the out Philadelphia lawyer with over two decades of experience serving the LGBTQ-plus community, entered the May primary for Judge of the Court of Common Pleas, an electoral enigma.

In her favor, the Philadelphia Bar Association awarded Palmer a “highly recommended” rating, one of just four they’d afforded the 25 candidates running for six open judicial seats on the Court of Common Pleas.

To her detriment stood her ballot position: 23.

Statistically, in races where constituents are less-informed on who’s running — like judicial elections — voters are more likely to choose candidates who appear first on the ballot. According to the Philadelphia Inquirer, in 2017, six of the nine winners in the Democratic primary for Common Pleas Court were in the first column. 27 candidates ran in total.

“That was the biggest sort of discouraging comment that I got all along: that there was no way that I could win with my ballot position,” said Palmer. “ But you know, I was really happy to prove those people wrong and show that if you run a really strong campaign, you can even overcome big obstacles like that.”

On May 21, Palmer became one of six Democrats and one Republican selected to run in November’s race. And because the general election affords more advantageous odds, Palmer has dedicated this summer to taking a break from campaigning to return to her practice, her directorial position at the LGBT Family Law Institute, and her family — wife, Lee Carpenter, and daughter, Ellie Palmer.

Depending on the election results, her fall schedule may include prepartions to leave Jerner & Palmer, P.C., the practice she’s co-owned and -operated since 2003.

“I have a lot to do still with my law practice,” said Palmer. “I’m representing people in trial: surrogacy and adoption cases. I’m primarily focused on serving my clients right now and discussing with my law partners the potential transition at the end of the year.”

If Palmer wins in November, she will legally no longer be able to own her own firm. Her clients and cases would be transferred, and a new partner would likely take her place.

“It’s a lot of mixed feelings,” said Palmer. “I’m excited about the new prospects of public service and being a judge, but it’s also hard to step away from what I’ve done for 21 years.”

If elected, Palmer will have the opportunity to serve on one of three divisions within the Court of Common Pleas: criminal, civil, or family court, a decision that senior and administrative judges will make based on her experience and what the court needs most.

Palmer is hoping for family court. She’s particularly interested in affecting child custody cases, in which clients are the most likely to be unrepresented, thus, heightening the judge’s importance.

“I feel like everything that I’ve done for the past 20 years … has added up collectively to prepare me,” said Palmer. “I’ve served a really diverse population over the years from racial diversity, socioeconomic status, clients who are having issues with disabilities or needed sign language interpretation or language interpretation. Just understanding all the different issues people are facing and having empathy for the reasons that bring them into court has helped me prepare for the experience.”