“I’m not an activist, but I think it is my duty to be open.” 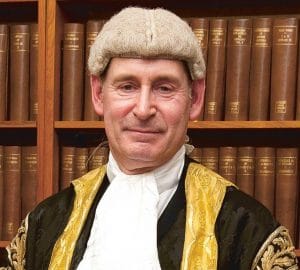 May 31, 2018 (Times of London) — When Sir Terence Etherton was practicing at the Chancery Bar, there was an unspoken policy that gay men would not be appointed to the bench because, he recalls, “it was thought that they would be open to blackmail, even after the 1967 Act [decriminalizing homosexuality].” Quietly the policy was changed by Lord Mackay of Clashfern, the Conservative lord chancellor. “But we didn’t know about that. When I took silk in 1990, I didn’t think a judicial career was open to me,” says Sir Terry.

With the arrival of Lord Irvine of Lairg, it was possible to apply rather than wait for the tap on the shoulder. Sir Terry thought: “I’ll jolly well show them up.” He had no expectation of appointment. However, it happened, in December 2000, and he went off to meet the lord chancellor, taking his partner, Andrew Stone, a lawyer, with him. “We went down the line and I introduced Andrew as my partner then of 22 years.” (This year they celebrate their 40th anniversary). Lord Irvine shook their hands warmly and afterwards would always ask how Andrew was.

Sir Terry, 66, was the first “out” High Court judge and, after that, the first in the Court of Appeal, first head of division (he was head of the Chancery division from 2013 to 2016) and now “first Master of the Rolls for some 700 years who has had a husband.”

He is not a gay campaigner, but does receive many requests for speeches on diversity, which he is forced to limit. “I’m not an activist, I am a private person, but did think it was my duty, in a way, my responsibility as the first openly gay High Court judge, to normalize the idea of a gay senior judge and [of a] gay couple living together, and that I would not budge a centimeter from being open about myself.”

The couple had a civil partnership and then in 2014 a traditional Jewish marriage, which was announced in The Times and attended by many senior judges. “That, I think, truly was a sign of changed times and attitudes within the judiciary and wider society.”

He has not encountered prejudice, but is conscious that younger aspirant lawyers “still feel quite uncertain of whether they will face prejudice, whether they should be honest about themselves or their sexuality and what stage they should deal with it. It’s still an issue for them.”

When at Cambridge, he captained the university fencing team and subsequently trained with the Great Britain team (switching from foil to sabre) with the option of going to the Olympics. He attended the World Championships three times, but not the 1980 Moscow Olympics because the Russians had invaded Afghanistan in 1979. “Rightly or wrongly, we all but one decided not to go. You can’t look back; it seemed the right thing to do at the time and that’s all you can say.”

At the time of the “Enemies of the People” furor his sexuality was alluded to, but there was a Twitter backlash in his defense. One tweet came from the author JK Rowling. “It was fantastic, because I’ve never met her. In substance she said: If you are an ex-Olympic gay fencer and a High Court judge, you’ve basically won life. Andrew had it transposed on to a mug for me. I thought it was wonderful.”